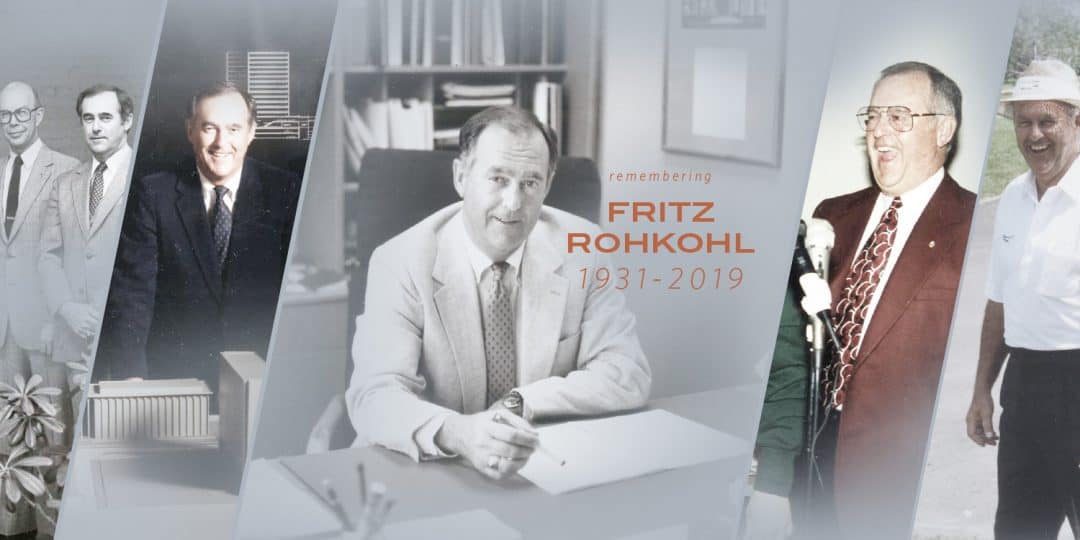 Architect, colleague, mentor, president. Fritz Rohkohl carried many names during his 39 years at BWBR, but no matter the position or title, the words to describe who he was never changed: kind, generous, selfless, fun, statesman.

The fourth president in BWBR’s 97-year history, Fritz left a mark on BWBR that is found in much of the way we practice today. He had a sense of family, and in that spirit, he established a culture at the firm that was emblematic of his caring and respectful approach to business and life. For both employees and clients, he created an engaging atmosphere where all felt positive about the process through which we created spaces to serve others.

Fritz spent his whole career at BWBR. He was hired for a part-time position by Jim Hirsch, one of the founders of the modern-day version of the firm, while Hirsch was teaching at the University of Minnesota. Upon graduation, he became a full-time employee and gained a reputation for being service-oriented, fair, and compassionate, a reputation that continued through his 15 years as president of the firm.

Beyond his business demeanor and acumen, Fritz was known for his giving nature, philanthropically, personally, and professionally. He mentored many staff who later became leaders at the firm. Fritz was also known for his friendly, fun personality, promoting the social side of work as much as the professional side. Even long after his retirement, he continued to be part of what we do, attending events and meeting both staff with whom he knew and new staff that came after his tenure.

Fritz’s name became part of the BWBR moniker in 1974, a move that often is a sign of what someone does to build a business. Fritz did more than help build a business. He helped put into practice the values that so many of us in the firm live to this day. It’s an honor that we carry on as a practice with his name in ours.