Is the mere existence of a sidewalk bordering retail and connecting a light rail station to a big box store considered “pedestrian-friendly?”

At 10 a.m., Saturday, Oct. 12, BWBR’s Nate Roisen, AIA, will be part of a community outreach effort at the corner of Hamline and University avenues of the heart of Saint Paul, Minn.’s Midway neighborhood to engage with people that use the sidewalk and space in the area and establish support within the community for a proposal Nate wrote to improve a pedestrian unfriendly environment.

Nate’s proposal, reprinted below, was originally written as a blog post on streets.mn in response to the unpleasant experience of pushing a stroller through the area. His blog post was used by the Hamline Midway Coalition, a district council representing Nate’s neighborhood in Saint Paul, as the basis for a grant application administered by the AARP to improve walkability for seniors living in urban environments.

The key principles that BWBR’s teams use to design an individual building – thoughtful organization of functions, clear circulation, careful material selection, and consideration of trade-offs required to execute an idea – are at work in the proposal. At its core, it makes the case that the spaces between buildings, particularly in an urban environment like Saint Paul, are as important to the user experience as the spaces inside. Even a thoughtfully designed building will be diminished in the eyes of its users if the environment outside is indifferent or actively hostile to pedestrians – a consideration that should play into design conversations on every project.

Like many parts of the Twin Cities, the Midway in Saint Paul is a slightly strange hybrid between urban and suburban built forms. Houses and apartments on narrow lots and streetcar-era retail buildings with zero setbacks coexist (oftentimes uneasily) with suburban-style big-box stores that have giant parking lots. The Green Line provides frequent transit service to places that have incredibly poor pedestrian realms surrounding them.

In the case of the Midway Super Target, the main pedestrian path is a very busy one.  Unfortunately, the transit-arriving guests must navigate a bumpy, cramped, cluttered sidewalk directly adjacent to a very busy stretch of Hamline Avenue.

There is no room here for the functions associated with an urban environment: people waiting to meet a friend, walking in groups, or enjoying a pleasant stroll. Everything is oriented toward the automobile, down to grassy areas and trees that serve mainly to frame monument signage and screen parking, rather than give a place for refuge from the surrounding environment. To call pedestrians an afterthought here is an understatement. The fact that this busiest of pedestrian paths interrupts a dense and largely walkable neighborhood is a real detriment to the rest of the city.

That said, a relatively simple intervention can be made that would vastly improve the experience of places like this. For the low, low price of one row of parking, (about 50 stalls, out of a sea of parking!) enough space can be bought to create a true pedestrian realm along this stretch.

The proposal below creates a 25-foot wide path buffered by raised planters adjacent to Hamline Avenue. In order to negotiate the grade change along this stretch, a retaining wall would be required at the Hamline/University intersection, which becomes a seating wall as it extends up the hill to Super Target. 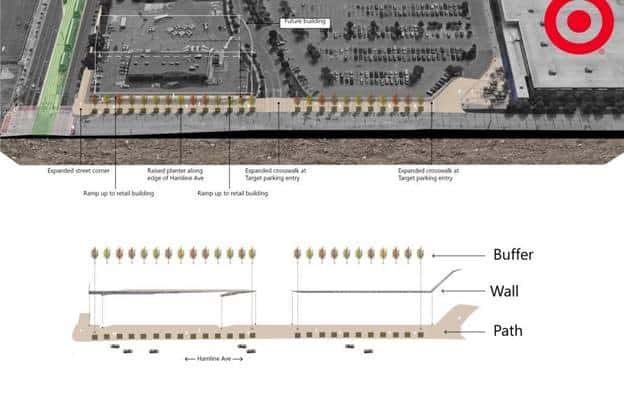 At the intersection of Hamline and University, enough space is created to allow groups of pedestrians to queue up without getting pushed into traffic. The buffer of trees would shade the path from hot summer sun, and planter beds offer a place to take a seat. 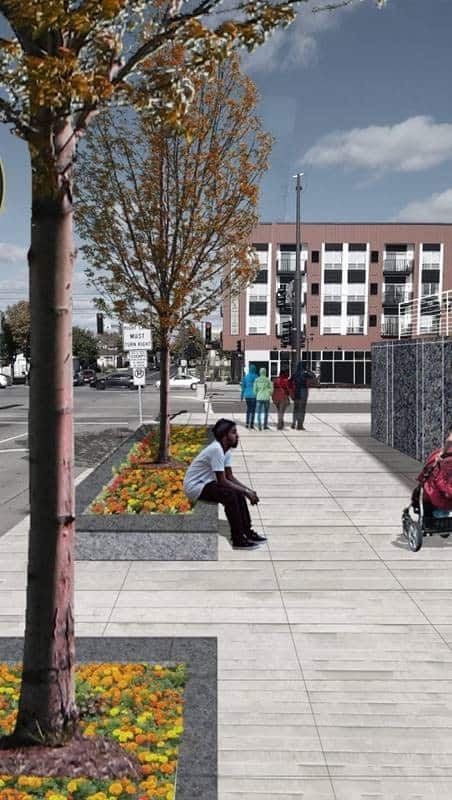 At the plaza outside the Target entry, the visual clutter of the existing space is better organized, allowing the pedestrian path to create a clear visual connection to Hamline Station. 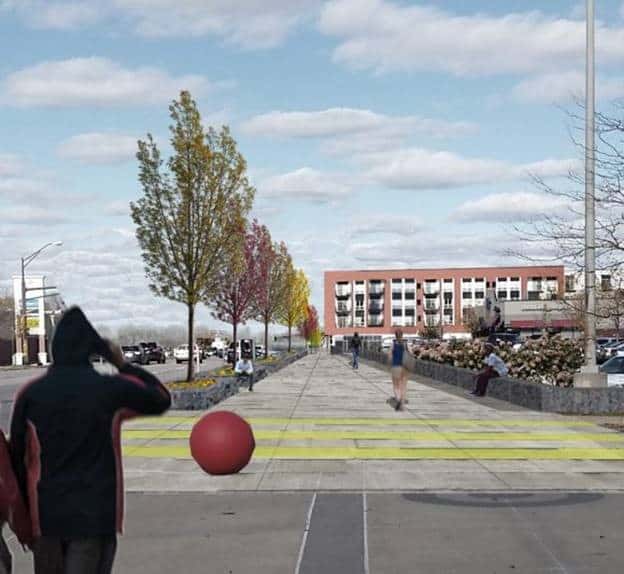 The combination of these simple moves – reduced parking, a vegetation buffer against the street, and a wall to help define a path – adds up to create an environment with obvious practical and safety benefits. Equally important, this project would serve as a signal that pedestrians are welcome and accommodated in the Midway, encouraging still more pedestrian activity, and promoting the kind of development the City is interested in attracting to the area.

Big-box stores like Target have advantages of utility and cost that mean they are unlikely to go away anytime soon – not to mention the Midway Super Target is only 8 years old. Projects like this offer a practical chance to chip away at the auto-dominance of places like the Midway and begin to connect them to the surrounding city. Who wants to help get this built?