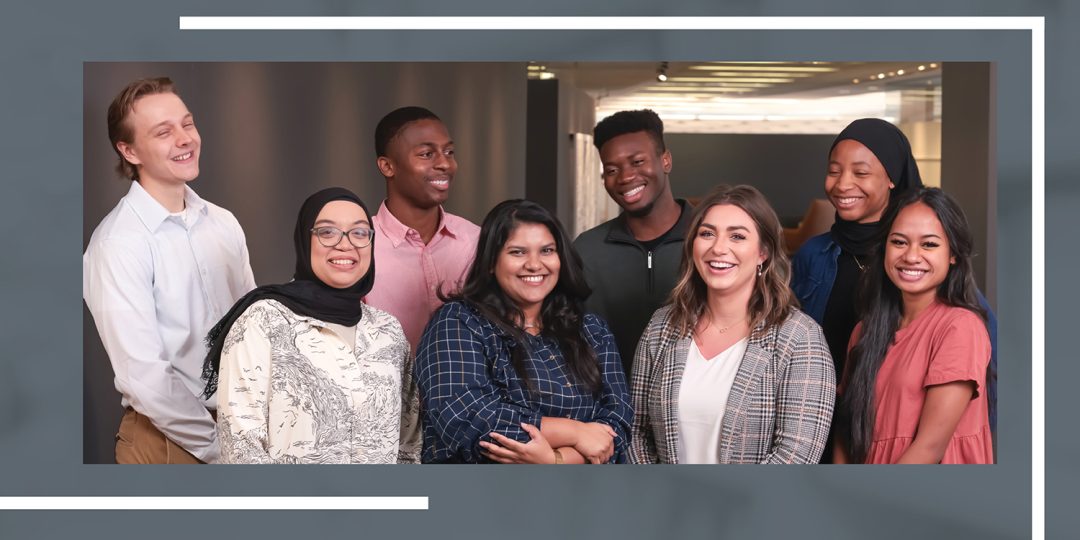 View from the Interior: What It’s Like to be an Intern at BWBR

There’s an assumption that summer internship programs are primarily for the benefit of the students who participate, but what about the amazing contributions they make to the organizations they’re working for? We recently sat down for a discussion with four of BWBR’s 2022 summer interns to learn more about their experiences and show some appreciation for everything they’ve done.

“We have an amazing group this year,” says project manager and architect Jarett Anderson, who hosted the discussion. “We’ve gotten so much from their energy and fresh perspectives, as well as the huge contributions that they’ve made to our offices, our culture, and our work.”

Here are the four interns who joined in the discussion:

A University of Minnesota undergrad in her junior year, majoring in interior design, Hasnaa Elaraby is originally from Egypt and came to the United States to attend college four years ago.

Lauren Burton is a master’s student in architecture at the University of Minnesota. She also served as a summer interior design intern at BWBR two years ago and is back with a different role after shifting her focus to architecture.

A fourth-year student at Dunwoody College of Technology and architectural student intern at BWBR, Cail Tomlin is part of a relatively new collaboration between Dunwoody and the U of M and will be pursuing early licensure early as part of the IPAL program.

Zeekra Baset Nadi, architectural design intern, is pursuing a master’s in health care design at Kent State University in Ohio after earning her bachelor’s degree in architecture from the American International University in Bangladesh, where she’s originally from.

As an intern at BWBR, you don’t just get sent to a cubicle and told, “good luck.” There is an extensive orientation process, the depth of which was pleasantly unexpected. “The orientation process surprised me the most,” says Hasnaa. “I expected maybe a day or two, not a whole week, and it was very well planned out. There was a lot to learn, and I thought we’d feel super overwhelmed, but we didn’t. There’s always someone to reach out to and ask questions.”

Interns have supervisors, mentors, and even social mentors to ensure that they feel welcomed and supported throughout the summer. Interns can talk to their support team about taking on more or fewer hours, exploring areas of interest, learning specific new skills, or anything else related to the role.

Orientation and onboarding are really about ensuring not only comfort level with the subject material and the company, but true psychological safety at BWBR. “That psychological safety lets you feel vulnerable and lets you raise your hand to say I don’t know,” says Jarett. “That’s a really important value at BWBR.”

Landmark Learning sessions are bi-weekly meetings focused on a rotating array of areas such as interiors, digital, and design. It’s a way to share valuable insights across different topics and help advance everyone’s holistic understanding of the industry. Interns are encouraged to attend sessions, and the feedback has been fantastic. “I really enjoyed the sessions,” says Cail, and he even made a point of viewing past archived lessons whenever he had a spare moment.

Lauren reports that these sessions were extremely valuable, especially if she came across a topic in her internship that she was less familiar with. “I’d say, I wonder if there’s a Landmark Learning session about that,” she reports. And, often, there was. Of course, if there wasn’t, there were plenty of people to ask for help, too.

The interns all mentioned the power of the support they receive at BWBR, and Jarett notes that the benefits go both ways. “Being with younger talent, who are just getting into the industry or advancing their skills, is incredibly energizing. When you mentor, you get the energy back that you put in.” And, of course, the emphasis on hands-on experience means that interns are generating real value for the firm as they learn.

The BWBR internship program currently offers a flexible structure that accommodates both in-person and hybrid options. While she had the option to be remote, Zeekra opted to come into the office five days per week. “For me, I thought, if I am only here for a short period of time, I want to utilize this time as a means of networking, socializing, and learning as much as I can.” She also likes the feeling of shifting from a home environment to a work environment. The best part is that she was able to choose the approach that works best for her. For Hasnaa, it was important to spend some time on-site as part of her role, because she is doing work at the interiors library, yet the team was flexible about when she chose to come in.

Cail started off hybrid but, due to a long commute, ultimately ended up fully remote. That works well for him as a parent because he can take extra time to be with his son. Plus, he feels more socially comfortable connecting on Zoom, which he describes as “democratizing the conversation.” Meanwhile, Lauren relishes her hybrid schedule which affords the opportunity to be in the office connecting face-to-face with people, yet also offers time to be focused at home without the distraction of socialization.

When prompted to provide feedback on the internship program, the answers spoke to the incredible level of initiative among this group. One intern said they’d like more critical — specifically negative — feedback, so they can grow. Another said they wanted more time, more projects, and more challenges. They also said they learned from their colleagues at BWBR that it’s okay to advocate for yourself, whether that means asking for more work or putting up boundaries when you have too much on your plate.

With attitudes like these, we expect that this isn’t the last we’ll be seeing of these fantastic young talents. THANK YOU to all of our 2022 interns, and best of luck with all of your future endeavors!

For more information or questions about the BWBR internship program, contact us. Listen to the full episode at the top of the page.