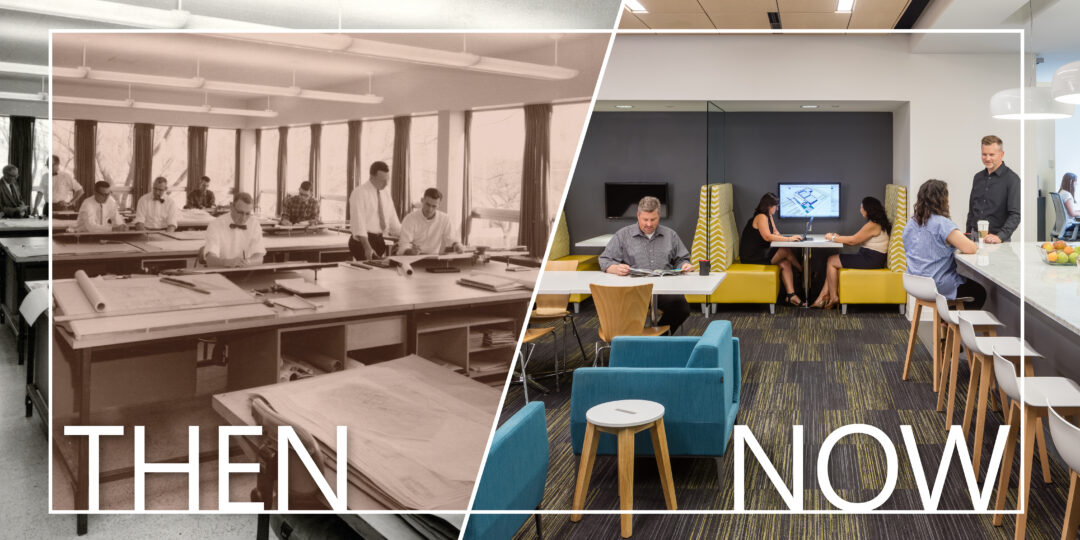 The Power of Infinite Thinking: 100 Years of BWBR

Number one: After an incredible, nearly 35-year tenure, current president and CEO Pete Smith, FAIA will retire at the end of 2021. The firm will be in extremely capable hands with new president and CEO Stephanie McDaniel, AIA, LEED AP, only the eighth person to hold the role in the firm’s history. Stephanie takes on this responsibility after 25 years at the firm and brings a deep commitment to the community and culture that is the bedrock of BWBR, combining a sense of continuity with excitement for the possibilities of the future.

Number two: We are heading into BWBR’s 100-year anniversary. To put that in perspective, evidence suggests that the average business in the United States survives only 15 years. Only a fraction of a fraction of a percent make it to 100 years.

While one could be forgiven for assuming that a century-old company exists out of pure stubbornness and is clinging to its past, BWBR’s success is powered by the exact opposite. We call it infinite thinking. On today’s episode, Business Development Manager Coral Digatono sits down with both Pete and Stephanie to talk about BWBR’s past and its future.

Infinite thinking demands constant re-evaluation and evolution, and it is core to BWBR’s philosophy. In drilling down to the nuts and bolts of the philosophy, Pete Smith cites a mentor, Lloyd Bergquist, one of the “Bs” of BWBR:

In other words, it’s not about you. This isn’t false modesty; rather it’s a perspective that ultimately serves everyone, and it informs how BWBR frames up client services and creates our internal culture.

“Many organizations don’t survive beyond the founders,” says Coral Digatono. “Yet BWBR has established a culture of developing future leaders who carry on the values and practices of their predecessors while continually looking for ways to make the firm a better place to work that offers better results for clients.”

There’s a difference between holding fast to your values and holding fast to outdated practices. Values can be a through line that carries an organization forward as it evolves. Case in point: Pete Smith acknowledges that BWBR’s history, and certainly architecture in general, is dominated by white males. And yet, BWBR hired one of the first women to graduate from the University of Minnesota School of Architecture program. Dorothy Brink was also one of the first women to be licensed in the state. “She was a really talented designer,” says Pete. And her accomplishments must be viewed through the lens of last century’s prospects for women in the field. Allegedly, the men in the U of M program made a point of trying to keep women out. “They required all sorts of engineering classes and then would deny women access to those classes.” They would attempt to steer women toward what was then known as a degree in interior decorating. But Dorothy persisted, and the firm benefited from her talents.

BWBR leader Milt Bergstadt was very focused on issues in the 1940s that were “almost unheard of” within the field at the time, including social justice, racial bias, job and housing discrimination, and more. “That set a tone for BWBR that continues today,” says Pete. In 1985, Milt was awarded AIA’s Whitney M. Young Jr. Award for significant contributions to social responsibility.

That’s not to say that the work is done. There is a long way yet to go to promote diversity, equity, and inclusion in the architectural field, and even at BWBR, but we are committed to being part of the solution. Infinite thinking means acknowledging the past and making changes to support what’s coming next.

As for what’s coming next? For that, we turn to incoming president and CEO Stephanie McDaniel. “We’re in a great place right now and will remain steadfastly committed to the service of our clients, creating environments that support the needs of their organization,” says Stephanie. She’s also focused on design excellence. “As architects and designers, we have the expertise to create amazing spaces that make our clients better, transform the lives of those who use them, and are delightful to experience.”

And of course, Stephanie says we will remain committed to our people. She has had 25 years to witness – and participate in – the power of elevating and supporting talented individuals. “One of the roles I will have as president and CEO is as the keeper of the culture,” she says. She is already meeting with teams to get their authentic perspectives, to learn what elements they think BWBR should nurture and hold fast to, and what elements are ready for change.

Stephanie is digging deep, exploring how BWBR can bring expertise to varied market sectors like health care, higher education, science and tech, workplace, behavioral health, and others. She’s also curious about how to leverage data to inform design. “I’m also really passionate about designing buildings that tread lightly on our earth,” she says.

While the industry as a whole is seeing what Pete calls “the erosion of the value proposition” and a “race to the bottom on fees,” BWBR is adding value by blending technology and innovation with a truly humanized foundation. That means optimizing client performance, with usability at the center and a nuanced understanding of how, exactly, the space will function. It also means championing usability more than anyone else while also emphasizing beautiful, sustainable designs. That trifecta – beautiful, functional, sustainable – is a tall order, but it’s exactly the kind of thing that infinite thinking enables.

To that end, BWBR is focused on leveraging more diverse perspectives. “It’s more than equity,” says Pete. “It’s simply good business.” While 50% of graduates in architecture are women, only 18% are in the AIA. The statistics are even bleaker for people of color. That leaves a massive amount of untapped talent, passion, and drive – the exact combination that is needed to thrive for the next 100 years.

And thriving for another 100 years, and another 100 after that, is exactly what BWBR intends do. After all, we’re known for building beautiful, functional, sustainable things that endure.