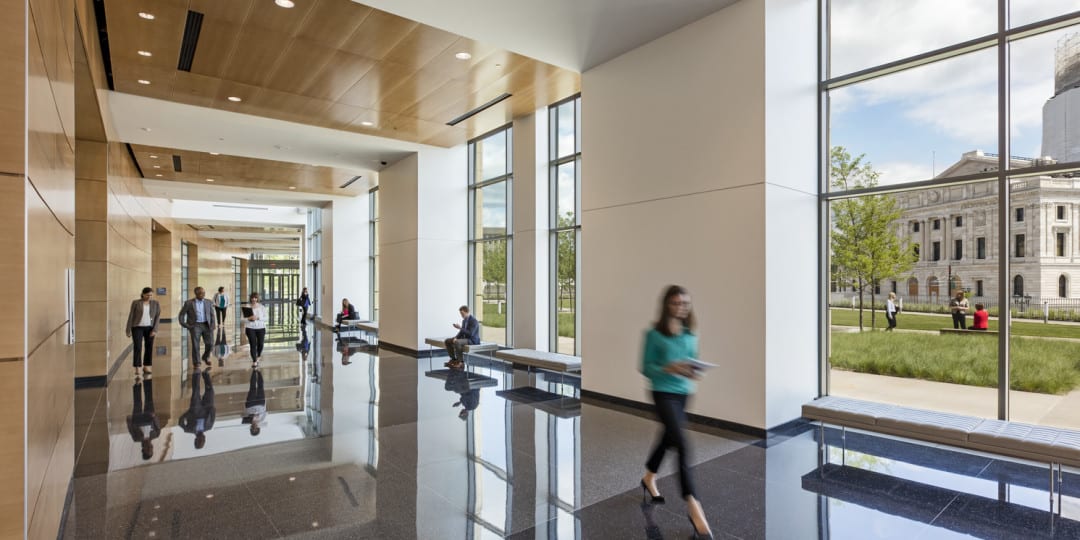 A 293,000-square-foot facility designed to stand for a century, the Minnesota Senate Building overcame a design restart and politics to come together in a short 20 months.

On March 15, the newest addition to the historic Minnesota Capitol District received the highest honor given by the Design-Build Institute of America-Upper Midwest Region, named 2017 Project of the Year. The team honored included BWBR along with Pickard Chilton and Mortenson Construction.

Designed to give greater citizen access to the legislative process and house all 67 senators and their staff, the Minnesota Senate Building exceeded costs and schedule goals by utilizing design-build methodologies. Originally started in fall 2013, the project was put on hold in early 2014 before moving forward with a redesign and then starting construction in August 2014. The building opened January 2016 to accommodate the 2016 legislative session while the Minnesota Capitol remained closed for a major renovation.

“The facility is very deserving of the recognition,” said Eric West, AIA, senior project manager at BWBR and on the project. “Beyond the hurdles of coming to life in a short timeframe, the Minnesota Senate Building is a beautiful facility that represents the best of Minnesota craftsmanship as well as architecture for the greater good. It’s a natural extension of the historic Minnesota Capitol that will serve the residents’ interest in the legislative process for generations.”

The building provides ample space to enhance the public’s connection to senators, including a wide public forum with panoramic views to the Minnesota Capitol, a 250-seat theater-style hearing room – the largest hearing room in any legislative building in the Capitol Complex – and two 150-seat hearing rooms which also accommodates accessibility needs. The team designed a connection to an existing tunnel underneath University Avenue and a light rail line to provide parking access under the Senate Building to the state Capitol, including for those with mobility needs.

A year-round working facility, the Minnesota Senate Building also supports more than 360 staff members and state employees who are officed in the facility, including critical IT infrastructure and a broadcast studio.

Facing immense budget pressure to hit the targeted cost-per-square foot goal, the team also had to respond to the pressure of delivering a legacy building that was extremely energy efficient. Engineers worked with the design-build team to achieve both, saving more than $500,000. That and other savings was reinvested into such items like an LED lighting system to reduce operational costs for the state. Designed to Minnesota B3 sustainability standards, the Minnesota Senate Building achieves a 37-percent energy savings compared to the baseline code.

The Design-Build Institute of America (DBIA) is an association of leaders in the design and construction industry utilizing design-build and integrated project delivery methods to achieve high performance projects. Founded in 1993 and headquartered today in Washington D.C., DBIA offers its members opportunities for education, networking, information, and advocacy. There are 14 regional offices to make information and education available throughout the nation. The Upper Midwest Regions represents Minnesota, North Dakota, and South Dakota for the Design-Build Institute of America.