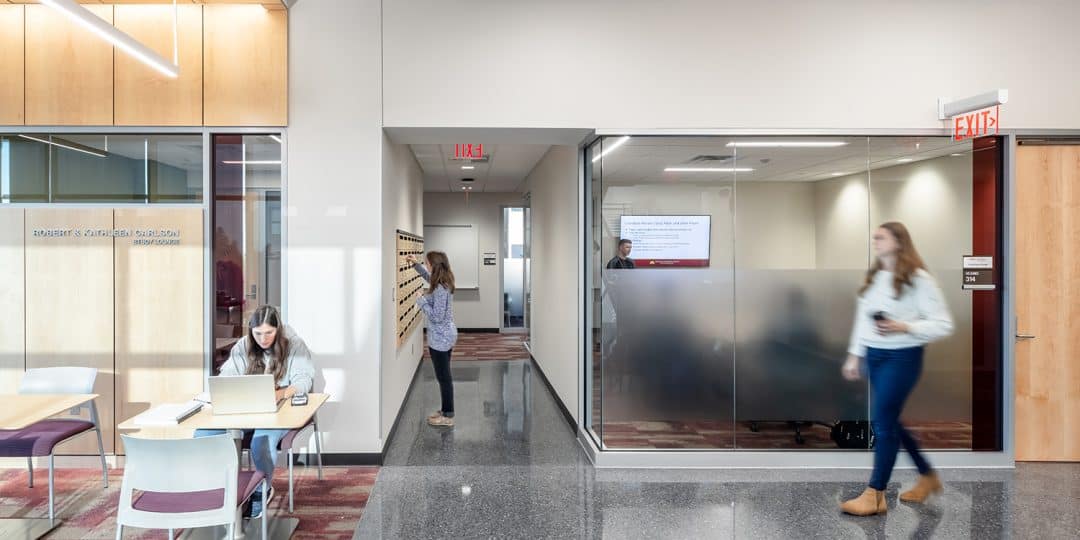 Got egress challenges? Fire code woes? These issues can have a big impact on project design and success, whether new construction or renovation. The existing components of a building used for one purpose might simply not be up to code for another.

The good news is that performance-based approaches to egress can offer more flexibility and value, as well as help teams strike a balance between safety and fidelity within an architect’s design for a project.

Roger “Lars” Larson, AIA, brings more than 32 years of experience as a licensed architect and code analyst with BWBR to the conversation. He’s a true thought leader, whose expertise is sought within policy and regulatory communities as well as across myriad project types, from health care to high tech, and HAZMAT to industrial.

For Musser, the critical role codes play was brought to life at an AIA event where three architecture firms reviewed a number of adaptive reuse projects, the struggles they encountered, and how they were resolved. All three teams noted how the change of occupancy meant the egress was inadequate, and in one case, it resulted in a complete redesign of part of the structure.

After the presentation, Musser asked each team if they’d considered using a performance-based egress approach instead of the prescriptive code. Their response was somewhat comical. “All of them looked at me like I had grown another head. None of them knew what I was talking about,” she said. “So I recognized that there was a huge need for our architecture teammates to really understand what these options are, so that we can help them resolve these problems at lower cost and maintain their client’s vision.”

But first, what is the difference between “prescriptive” and “performance-based” code approaches?

Musser explained that prescriptive code sets forth a minimum or intended level of protection, plus a method to reach it. But that’s not the only way to get there. She said, “A performance-based approach is when you boil down that intent, and you come up with some sort of alternate means to meet that intent, and provide an equivalent or better level of protection through some sort of alternative method.” Known and broadly condoned by international regulatory bodies as “alternative means and methods,” it’s basically finding a different route — sometimes a better route — to the same solution.

Prescriptive code requirements are based on years of extensive data about how humans move through and respond to fires. Codes such as maximum occupancy, the required width and number of exits, and limiting travel distance and dead-end corridors are all based on this analysis. The goal being, of course, to ensure that people can get out of the building as quickly as possible.

The Power of Fire Modeling

A performance-based approach involves comparing the available safe egress time before a building becomes untenable (the Available Safe Egress Time [ASET]) with what’s required to safely exit (the Required Safe Egress Time [RSET]). Both can be determined through fire modeling that goes beyond the criteria for tenability.

The team analyzes not only the size and location of the fire, but also smoke production and how the smoke layer develops, toxic products of combustion, oxygen concentrations, and visibility, which is often the first tenability criteria to fail. It even accounts for the time it takes occupants of a specific building type — whether a night club where inebriation is in play, or an assisted living facility where dementia could complicate matters — to detect a fire and make the decision to leave the building.

Proving that an approach is valid and getting buy-in from the authority with jurisdiction requires the ability to not just tell, but truly show performance in a real-world (but often worst-case) scenario.

Telgian Engineering and Consulting leverages fire dynamics simulator software to produce a visual rendering for authorities like fire marshals. The software also has the option to show the simulation in a 3D model video, which is extremely powerful.

Larson reinforced the notion that fire modeling not only adjusts for the nuances of different people and places, but also helps bridge the gap between the many disciplines — and the related points of view — that authorities like fire marshals may be coming from, whether it’s the trades or a past life in firefighting. He said, “The firefighters go, ‘Ah, that’s not what happens. No.’ And they can speak for it. Because they see the fire. They’ve experienced the heat. They’ve experienced erratic behavior by some people.” He continued, “But when you show a movie to them, they are going to go, ‘This is really interesting.’ …They’re the ones you have to get to.”

There are seemingly endless cases for using the performance-based approach. One team designed an atrium with geometry that was proven through fire modeling to allow smoke exhaust to be completely removed by smaller fans that require less energy from emergency generators. Another team designed a museum-turned-event-space with an egress that was based on it only being used as a museum. Each design team will study the modifications needed and help the owner make sound decisions about a safe and cost-effective way forward.

Musser acknowledged the limitations of the performance-based approach and offered insights on how to surmount them.