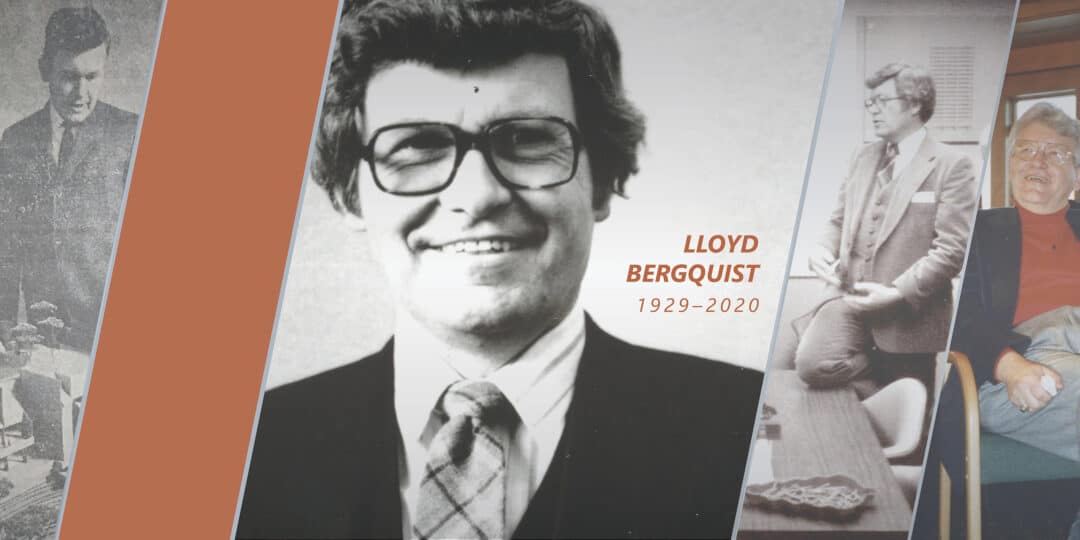 Lloyd Bergquist, the second ‘B’ in BWBR, passes

A gentle soul always with a smile on his face.

More than a physical description, those words captured the essence of Lloyd Bergquist. A person who valued the lives he touched more than the projects on which he worked, his friendly and approachable demeanor was a hallmark of his personality at BWBR, one that continues to be felt through those he mentored and one that will be missed even by those who had brief interactions with him.

Lloyd passed away on Nov. 14 at the age of 91. The legacy he leaves behind goes far beyond his name in the firm’s moniker, BWBR (Bergstedt Wahlberg Bergquist Rohkohl).

Lloyd’s name sitting next to Chuck Wahlberg’s seemed rather apropos given that it was Chuck’s recommendation to Milt Bergstedt in 1957 to hire Lloyd. Still relatively fresh out of the University of Minnesota’s architecture school, a time that was interrupted by service in the Army, Lloyd had impressed Chuck while the two worked together at a previous firm. Upon hiring him, the firm gave Lloyd the task of opening at office in Menomonie, Wis., in pursuit of work. While not a fruitful endeavor for the firm, it proved advantageous for Lloyd, who met his wife while singing in a choir before moving back to the Twin Cities and continuing to build BWBR.

Lloyd’s warm and affable nature not only benefitted the firm through the projects he earned with the relationships he made but it also attracted the talent during his time as hiring director, some who would later become leaders, themselves. Among those include Greg Fenton, one of six current directors, and Pete Smith, current president and CEO of the firm, whose family moved next door to Lloyd when Pete was 5 years old. While Pete may not have known then he wanted to be an architect as an adult, Pete credits the mentorship and friendship Lloyd provided for his path in the profession and the firm.

Lloyd’s name was added to the firm’s moniker in the mid-1960s, and through the 70s and 80s, his position as vice president helped shape the course of the firm that it remains on today, both in the world of design and the profession, itself. Like Milt, he believed in the power of diversity and social justice to build better communities, and his eye for art and design allowed him to see how people could benefit from great architecture. That appeared in his work for churches like St. Anthony Village Lutheran, Normadale Lutheran, and St. Bartholomew Catholic to the renowned Arrowwood Resort.

Design of Inver Hills Community College earned the firm its first design award from the Minnesota Society of American Institute of Architects in 1973. Lloyd’s work on 111 Washington Square still holds prominently in downtown Minneapolis’ Gateway District. His talent and professional success earned him an appointment to the College of Fellows with the American Institute of Architects in 1980.

Lloyd retired in 1995, playing choral director at the company holiday parties until his last as an employee. While no longer coming to the office on a daily basis, he never really left the firm, visiting often and still providing the mentorship that those he mentored practice now. And with each visit, he brought his gentle and warm nature which even young employees associated with his smile.