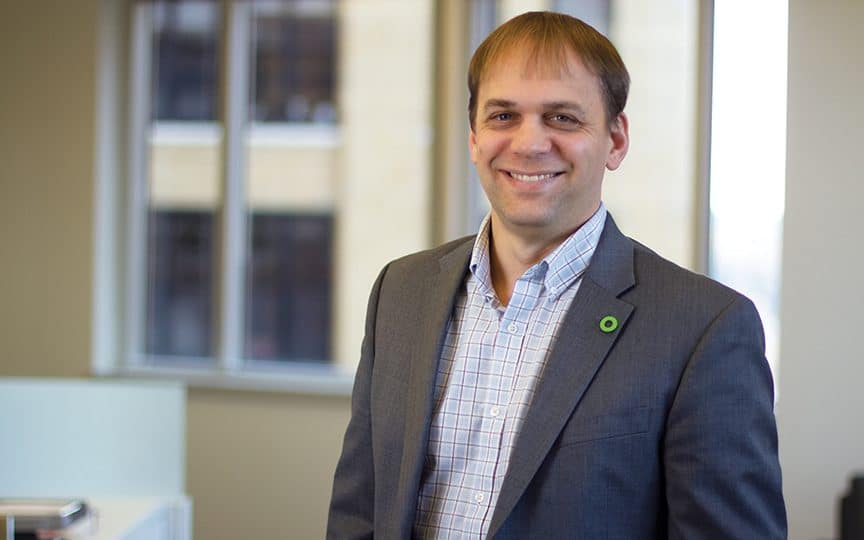 Citing his advocacy and passion for sustainability and design, the American Institute of Architects honored Jesse Turck, AIA, LEED AP, with its 2020 national Young Architect Award announced in February.

A project manager at BWBR, Turck’s demonstrated expertise appears in his work both on projects incorporating energy efficiency and sustainability standards into their designs and on task forces and committees dedicated to pushing such strategies further. That has included co-chairing the Committee on the Environment for the Minnesota chapter of AIA, serving on the Minnesota Resiliency Collaborative, and the Market Leadership Advisory Board for the state chapter of the U.S. Green Building Council.

In 2018, Turck was selected by Climate Generation: A Will Steger Legacy to be a delegate to the United Nations Framework Convention on Climate Change-COP24 in Katowice, Poland. Joining three other corporate and small business leaders from Minneapolis-Saint Paul.

“Climate change and architecture are inextricably linked,” Turck said about the need to attend the congress. “Severe weather events threaten all structures, but, even more, buildings directly contribute to the CO2 emissions that are known to contribute to climate change.”

Inside the firm, Turck has advised its sustainability efforts through the work on the Performance Design Group, the firm’s sustainable design committee. With committee members, he encouraged firm leadership to sign the 2030 Challenge in 2007 when it was release and also the AIA 2030 Commitment that challenges architects and engineers to make buildings carbon-neutral by 2030. Most recently, he’s worked with leaders inside BWBR to adopt the AIA Framework for Design Excellence that will guide it’s future project work.

“To say Jesse lives out his passion is an understatement. His genuine interest in environmental sustainability and resiliency is seen through both his work in the firm and his activities outside of the firm,” said Pete Smith, FAIA, president and CEO of BWBR. “As much as he’s established himself as a go-to resource, he is approachable and wanting to help others do better in design and in life. It’s that persona that invites others along the journey of design that can make our profession more open to those interested in design.”

“When people want to know why I work hard to contribute to the profession as a leader in sustainability, I think of the three children my wife and I have. I want them, and other children, to have the opportunity to grow up in a world better than the one we’ve experienced,” he said.