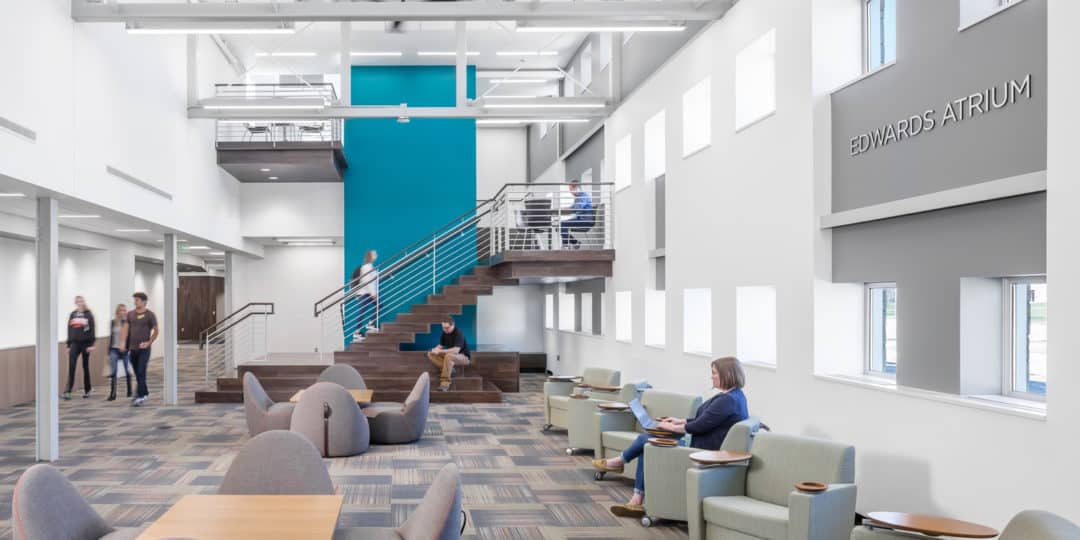 Anderson Hall had been shuttered since 2011 until a remodel restored the 70-year-old building into a teaching and student resource center. The building is home to the Education Department, the Bonnier Multifaith Center, state-of-the-art classrooms, and student gather and study areas. Originally housing the campus library and humanity and social science resources, Anderson Hall opened in 1947 displaying thoughtful attention to daylighting and the play between function and openings in the façade.

The design approach in its most current incarnation reintroduced the daylight strategy that had been lost in an early 1970s remodel. Then, large window openings were filled with limestone panels as a response to the energy crisis of the time. In the newest remodel, those panels were removed or modified with new windows or glazed curtain wall. A main lobby on the second floor of the space welcomes students from the campus green, with two key campus spaces – the Edwards Atrium (a campus gathering space) and the Bonnier Multi-Faith Center – designed off the main lobby.

Floor plates were removed to create the open and airy atrium space. A monumental staircase draws people from the atrium to other areas in the building. In the multifaith space, a luminary pulls in diffused western light and draws the eyes toward a contemplative view of the Minnesota River Valley.

The interior materials used throughout the building are intended to be a soft backdrop to enhance the original architecture. Original interior limestone wall features and Terrazzo flooring were preserved and restored. Color was used strategically to highlight architectural features.

“It’s an honor to have peers in our industry recognize our efforts on this facility,” said Hanna Kuehl, CID, an interior designer and project manager for Anderson Hall. “Gustavus’ campus is warm and inviting, true to its Scandinavian heritage. The remodeled Anderson Hall is a great design that carries forward that heritage to welcome an increasingly diverse student population into the Gustavus community.”

The IIDA Northland FAB Award is the second honor the facility as received. In 2018, it was certified LEED® Gold by the U.S. Green Building Council, joining the BWBR-design Beck Hall on campus as the second LEED certified facility on campus. Among the strategies that earned it the designation was the reuse of as much of the original regional limestone as possible.

The IIDA Northland FAB Awards celebrate interior design projects that are fresh, artistic, and brilliant, display innovative design solutions, and demonstrate an integrated team approach as judged by a 3-person panel of industry experts. The awards are administered by IIDA Northland, the regional chapter for the International Interior Design Association.