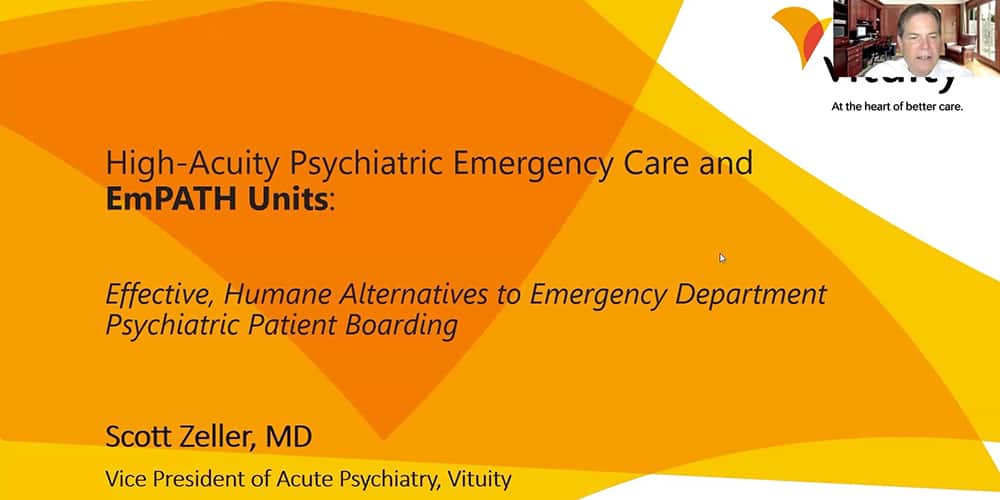 The numbers, alone, are attention grabbing

– Hospitalizations for patients with acute psychiatric needs have dropped 70-80 percent.

– Boarding for this patient population in the emergency department has dropped by 90 percent.

– Average length of stay for patients with acute psychiatric needs has dropped to 16 hours.

– Recidivism rates for this patient population has dropped significantly.

– At one institution, nearly $1 million was added to the emergency department’s finances by the addition of an EmPATH unit, making ER beds available for other patients presenting with physical ailments and traumas.

Some of the most notable arguments for implementing an EmPATH unit for emergency care aren’t found in the numbers but rather in the compassion with which Scott Zeller, MD, creator of the model, talks about this patient population and their need for an environment that addresses their suffering and pain.

“There needs to be a recognition that these folks are coming, and we need to prepare for them just as we would need to prepare if a lot of heart attack patients were coming,” he said. “What we found is that most psychiatric emergencies can be stabilized, and end up being discharged within a day, if we start treatment immediately just like we would for somebody coming in with asthma or chest pains.”

Zeller, vice president of acute psychiatry at Vituity and a noted scholar and author on the subject, spotlighted the EmPATH model for psychiatric emergency care and the reasons for implementing in the most recent BWBR Live Talk. From the rising demand for psychiatric emergency services to the outcomes institutions using the model are seeing, he walked attendees through the impetus for the model that takes an environmental design approach to improving the care and therapy for patients in crisis.

“What we found is that if you go to an EmPATH unit instead, 75 percent of those patients can actually get better, get stabilized in less than 24 hours, and we can avoid the need for hospitalization.”

EmPATH units are physical environments designed for acute psychiatric patients to receive assessment and evaluation in a therapeutic and least restrictive setting. Complementing the emergency department, the units provide a calm and comforting environment for patients, allowing movement and, more importantly, human interaction that is vital in the first 24 hours of treatment, something often not available in the emergency department.

“To the outside observer, it’s not as obvious how much people in a psychiatric emergency are suffering. It’s difficult for people to understand,” Zeller said.

“What does it feel like to be so despondent, to so hate the world, that you don’t want to take another breath? What does it feel like to be in a state of psychosis that…you are literally hearing voices in your head? What if the voices in the head are telling them to attack family members or break things or hurt themselves? Doesn’t that sound like an emergency situation that we really want to jump on and help as quickly as we can just like we’d want to jump on someone experiencing chest pains or who is actively bleeding or been in an accident? We’d want to make sure we intervene as quickly as possible and stabilize these crises because people are suffering.”

In a time when 1 in 8 patients presenting in the emergency department are there for mental health reasons, the concept for an EmPATH unit is both operational and outcome-focused. As more patients in mental crisis seek treatment in emergency rooms, they tend to be boarded in suboptimal spaces for hours or days awaiting a psychiatric or inpatient bed. During this waiting period, patient movement is often restricted, and other patients with physical needs are triaged ahead of those with psychiatric needs.

Zeller said not only is the delayed evaluation working against the patient’s condition, but the emergency department environment, itself, could exacerbate the patient’s psychiatric condition.

“It’s an environment in the emergency department that is really not conducive for their healing. In fact, it’s a very disruptive environment. It can be frightening,” he said. “There is not enough space to provide a comfortable, nurturing, soothing, healing atmosphere for these patients.”

EmPATH units address this need. The units are designed both for patient movement and interaction. Open nursing stations and unlocked rooms create an atmosphere of trust and allyship with the staff, while the mix of daylighting, views to nature, or appropriate imagery establishes a sense of hope. Coupled with an immediate assessment of the patient’s condition and needs, the EmPATH unit helps to not only stabilize the patient but also discharge the patient in a more timely and effective period.

Both the therapeutic and operational aspects of the unit reflect Zeller’s Six Goals for Emergency Psychiatric Care:

“If we do things the best way possible, we can avoid the need for hospitalization in 75 percent of high-acuity patients that, in any other system, everybody would say the person needs to be hospitalized,” Zeller said. “What we found is that if you go to an EmPATH unit instead, 75 percent of those patients can actually get better, get stabilized in less than 24 hours, and we can avoid the need for hospitalization.”

In addition to providing a conducive environment for treatment, the EmPATH units create the space for evaluation and re-evaluation, something not afforded in the emergency department where a mental health professional only receives a snapshot of the patient’s condition in that environment, he said. Instead, the EmPATH unit provides a gentle and benign setting for the care team to constantly evaluate a patient and discharge with an appropriate treatment plan.

The benefits of the unit go beyond the patient with acute psychiatric needs. Citing studies, Zeller noted that because of the length of stay for acute psychiatric patients in the emergency department, another 2.5 patients aren’t able to use that bed. Moving acute psychiatric patients to an EmPATH unit not only improves access to care for other patients, it leads to the better metrics reported from institutions as diverse as urban providers, rural hospitals, and academic care centers are reporting.

“EmPATH is an idea that all can use and embrace. This is an idea to help our unfortunate psychiatric patients,” he said.