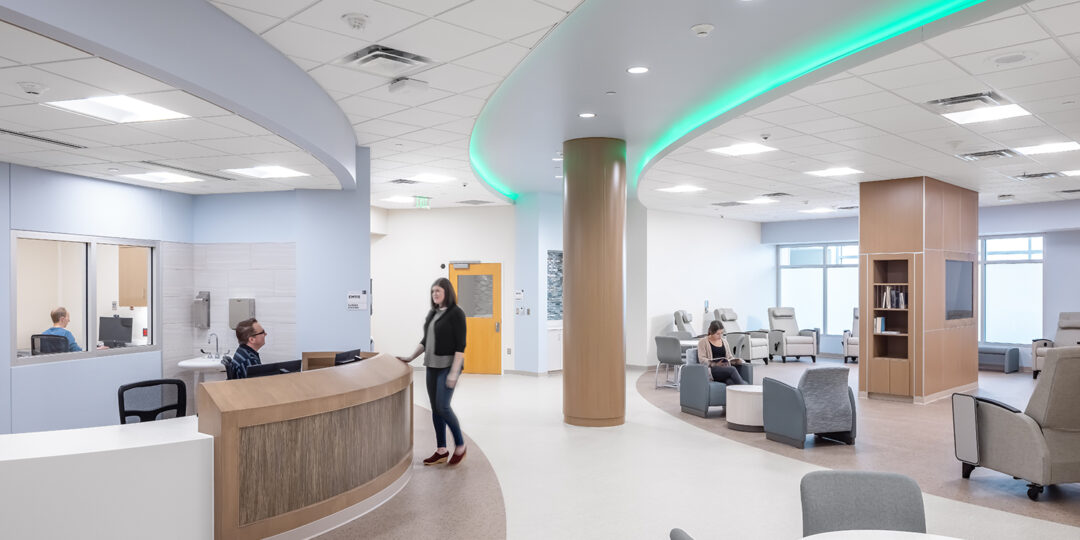 In this episode of Side of Design, we discuss the EmPATH model of emergency health services with Ryan Johansen, AIA, and Dr. Lewis Zeidner, PhD. Ryan is a BWBR architect and principal who focuses on health care facilities and the residents they serve, from large medical centers to Critical Access Hospitals and community clinics.

Our guest speaker, Dr. Zeidner, is a system director for clinical triage and transition services within the M Health Fairview Health System in Minnesota. Dr. Zeidner is a specialist in emergency mental health care, and his work is focused on improving access to care in the least restrictive care settings that keep patients safe.

Dr. Zeidner said that in the context of an emergency department, there are many examples of what could be considered mental health crises. Someone might seek help for concerns about their mental health related to their drinking or use of drugs, anxiety, sadness, worries, or quality of life, to name just a few instances.

There are also times when people seek emergency treatment for primarily medical symptoms, but the secondary symptoms underneath are related to a mental health crisis. For example, someone may feel like they’re having a heart attack, but they are really having a panic attack.

What is EmPATH and Why is it Important?

“EmPATH is important because it’s a redesign of emergency department space to meet the needs of a person in a mental health crisis. It has a calming atmosphere and an ability to regulate lights and sound, but it’s designed differently to be more like a living room space than a traditional hospital. It gives the patient the ability to feel more comfortable, and the ability to self-calm in that space.”

Ryan added that EmPATH design must be human-centered and capable of respecting all patients and staff who use the space. “Bringing that sense of safety to the space makes it a safe space not only for the patients, but for the staff who work there as well. There are some difficult things that staff have to go through, and those are trying times. So, creating spaces for staff in these types of settings is just as important as creating the space for the patient — calming, comfortable space with lots of natural light and positive distractions can help as patients are treated.”

Dr. Zeidner also detailed the ways in which EmPATH units are more comfortable for patients in crisis. “In the EmPATH unit, patients are able to be in their own clothes, walk around, get something to eat or drink when they need to, and so they’re much more able to make their own decisions and are less controlled by the environment. That gives them the ability to self-calm.”

“In the EmPATH unit, we also have the advantage of time,” Dr. Zeidner added. “If someone is somewhat agitated, we’re able to wait and then see them when it’s more convenient for them to interact. This allows the patient to control the environment a bit more, and therefore, control their outcome.”

Dr. Zeidner noted that by using the EmPATH model, his department has been able to reduce the number of patients who need to be admitted to an inpatient setting.

The national standard for people who present with a mental health crisis in an emergency department and are admitted for inpatient care is 60%. After opening the EmPATH Unit at Southdale, M Health Fairview has reduced that number to 40%, showing just how effective the EmPATH model is at treating and discharging patients rather than filling up inpatient beds.

Dr. Zeidner also stated that the national average for EmPATH patients who are later admitted to inpatient care is 25%; the Southdale EmPATH Unit has achieved an average of 17%, meaning even more patients are being treated and discharged directly from the EmPATH unit, and fewer patients need to be admitted to the inpatient unit.

Dr. Zeidner’s practice has found that the amount of time a patient spends in the medical emergency department can be significantly reduced. “One of the issues for many emergency departments is throughput. If mental health patients take a significant amount of time in the ED, the ED waiting rooms fill up. As a result, a certain percentage of patients leave without being seen. If those patients are not adequately cared for, that leads to lost revenues for the system.”

“Being able to quickly move patients from the medical ED into the EmPATH unit means that we free up space in the emergency department. In doing so, we’ve been able to significantly reduce the number of patients who leave without being seen, as well as the number of patients who complain that long wait times were problematic for them,” said Dr. Zeidner. “Both of those metrics have been really important for us, as we’ve looked at the patient result in addition to the patient satisfaction levels.”

Ryan and Dr. Zeidner also acknowledged that there are important differences between adult and pediatric mental health care, as well as different trainings and health care backgrounds that staff require to be successful in an EmPATH unit versus an emergency department.

“As architects, it’s relatively easy to come up with different ways of designing the spaces and using the design to help influence behaviors, but ultimately, the unit’s success comes from care team buy-in and from the people that operationalize the unit,” Ryan said. “You can’t just pick one team up from the traditional ED and say, okay, we’re going to run you out of the EmPATH unit tomorrow because those departments are wildly different.”

Patient success is also linked to a clear path of next steps, appointments, and a care plan. Dr. Zeidner said, “Historically, emergency departments would give a referral phone number to a patient to call and make their own appointment, and most people don’t make that call. We found that it’s really important for people to leave with an actual appointment for an actual time. Then we follow up with ‘caring contacts’ or a telephone call to the patient in the next 24 hours to make sure that appointment will continue to be workable for them. This has reduced the no-show rate for those follow up appointments by almost a half.”

How Can We Continue to Improve?

Dr. Zeidner believes that health care systems should continue to focus on the reimbursement for EmPATH services. “I think there are different models in different states, but one thing we have identified is that the value we create for patients, and ultimately for payers, is much greater than the sum of the reimbursements that are currently available. So, there’s some need for some new models for reimbursement. The other piece that we’ve learned is that the income statement of an EmPATH unit is not the sum of the value to the health system for the patients, and there’s a need to look at the broader value of the EmPATH unit in the health system.”

Ryan reflected on lessons learned that were similar to a BWBR Live talk with Dr. Scott Zeller, MD, in which M Health Fairview presented findings from their first implemented EmPATH unit at the Southdale location. “It was really important to understand the differences between adults and PEDs as they’re bringing a pediatric EmPATH unit online. It’s really exciting to be a part of the entire conversation. I’m looking forward to what comes next in terms of EmPATH units.”

If you’d like to learn more about EmPATH unit design and services, you can reach Ryan Johansen at rjohansen@bwbr.com, or Dr. Lewis Zeidner at lewis.zeidner@Fairview.org.