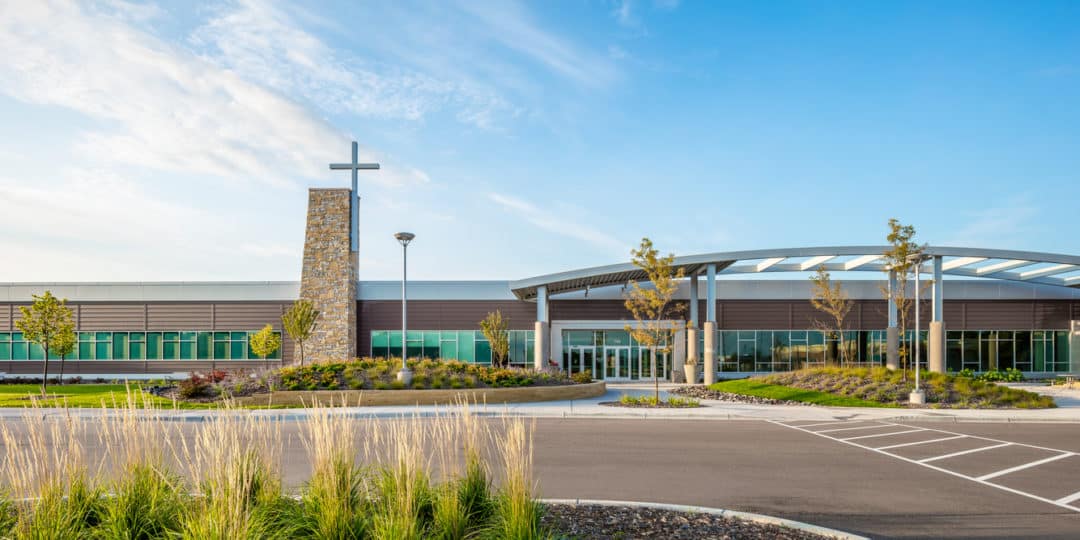 As Easter brings a sense of celebration and rejoice to congregations, at Eagle Brook Church-Anoka it marks a milestone. Little more than a year ago, this new campus for Eagle Brook Church came to life in one of the more unsuspecting places – a run-down building that housed a long lost Kmart in this northern suburb.

Today, it stands not only as a testament to a vision for new life, it represents the idea of worship innovation. This isn’t the story of thinking outside of the box, though. Just the other way around, it’s an example of what a church can achieve by “thinking inside the box.”

Enter the lot of the new EBC-Anoka, and the vestiges of a cavernous discount department store where flash sales are completely wiped clean with a colorful palette that welcomes congregants into a vibrant and dynamic worship community. While the approach is nothing new for Minnesota’s fastest growing church, the execution represented a significant deviation from the way other Eagle Brook campuses developed.

Anoka is the sixth campus for Eagle Brook Church, a multi-site Christian community that has grown from a main campus in Lino Lakes that opened in 2005 as one of the region’s first church communities to feature stadium-like seating, mall-like atriums with cafés, and children ministries with distinct and specific identities. Like the other campuses, Anoka grew out of need, where overcrowding temporary locations led to the search for a site that could accommodate traffic, crowds, and a sense of communal celebration.

Unlike the other campuses, though, Anoka developed from an existing site – not a church site and not a clean site. It created a design challenge, if not design options. If developed like other Eagle Brook campuses, the facility would be placed in the middle of the lot, flanked by two parking lots. Existing parking access, though, along with utilities and the existing shell presented other opportunities.

No Need for a Blank Canvas

By keeping the location of the building and reworking the interior layout, EBC opened the door to an all-new experience. 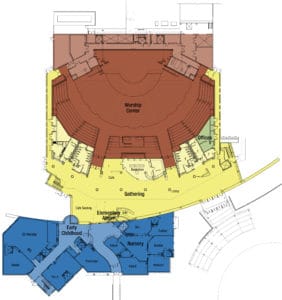 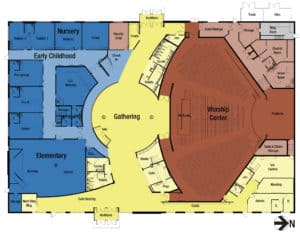 At campuses like Blaine and Lino Lakes, the natural flow of the facility brings people in through one of two entrances. Families typically follow the flow into the children’s zone before entering the auditorium, while others may utilize the central community space, stop at the café, or enter directly into the auditorium. After a worship service ends, a crisscross flow of people is created as the two groups reverse their routes.

The former Kmart’s existing long layout shaped a new flow for EBC-Anoka. The community space is located at the front entry, rather than centered between the auditorium and children’s zone. Everyone enters through the front doors before routing to one of three main destinations: the eastern children’s zone; the southern auditorium; or the western café. This way, people can still interact as they wish, but without going against a cross-flow of pedestrian traffic.

Inside, typical EBC design elements were incorporated, but reformatted to better suit the Anoka campus. Windows span nearly the entire front face of the building to flood the interior with natural light and invite everyone to experience EBC. Since the Kmart ceiling heights were designed to be lower for the needs of a retail space, the tiered 1,000-seat auditorium was formed by removing part of the floor slab. Columns are minimized in the auditorium space by converting the structure to long-span.

The existing parking lot stretched all the way to the front doors of the building. By demolishing the first two structural bays of the building, BWBR was able to create a buffer between parking and the building. The finished plaza is a welcoming, open green space for outdoor community gathering and a softer entry.

From a designer’s point of view, Eagle Brook’s success goes beyond the crowds. It shows how the skills needed to create a congregation on an open campus can translate to a campus with existing and, even more significant, non-tradition facilities.

For Eagle Brook, it marked an evolution for the church that had grown in 13 years through the development of new sites.

The community’s embrace is the success, though. For a property that had been lost to changing demographics and shopping patterns, Eagle Brook-Anoka brought back to life a destination that now welcomes individuals and families, creates vibrancy, and unites a community in worship and celebration through four packed services each weekend. Thinking inside the box, Eagle Brook has created for Anoka something much greater outside of it.