Blackboards vs. White: The Choice Lies in a Grey Zone

Visual communication of educational content between the instructor and the students is essential to an education. Technology aside, two of the most common surfaces to accomplish written communication are chalkboards and marker boards (often referred to as blackboards and whiteboards). You might think the decision over which surface is better would be straight forward, but there is no simple answer. In fact, it’s a common source of debate between faculty and facilities staff on college campuses.

Chalkboards have been used in educational settings for more than 200 years. Originally made from slate, they are now constructed of less expensive porcelain enameled steel. Many faculty members prefer them because they like the feel of the friction between the chalk and the board. It allows them the ability to draw better graphs and diagrams with multiple colors and lines that cross over one another without compromising the first line.

Some even say that writing with chalk forces them to write slower, therefore being more thoughtful and purposeful in their teaching. Chalk is often favored by faculty over dry-erase markers because it is inexpensive, non-toxic, reliable, and versatile. It can be used by mathematicians as well as artists.

When the Dust Settles

While cleaning chalkboards is easy to do with a cloth and water – no harsh chemicals needed – they actually carry a bad reputation with facilities staff because of the dust. Chalk dust is not only an irritant to humans (causing allergy and asthma problems), but it can be harmful to electronic devices such as computers and DVD players. Cooling fans located on the devices may draw chalk dust inside where dust builds up on heat-sensitive parts. This can significantly reduce the lifespan of the product and can cause frequent replacement. 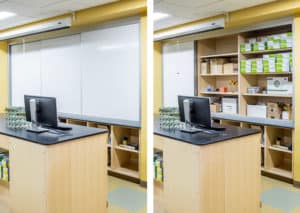 Facilities staff typically prefer whiteboards, citing that they are easier to clean and maintain. For a college campus or other heavy use areas, a glass or porcelain enameled whiteboard will offer excellent performance over less expensive whiteboards made of laminates, acrylic and polyester coatings. Glass whiteboards will not become stained over time like the others.

There are many options when it comes to whiteboards. They can be magnetized, come pre-printed with custom graphics, and even can come in colors other than white. What’s not to love? While some faculty believe that dry-erase markers are more user friendly than chalk (markers take less effort and pressure than writing on a chalkboard), others cite concerns with  the boards and their markers: dry-erase markers have a strong smell; the markers always dry out; the markers can leave ghosted lines behind.

I would feel remiss if we didn’t talk about the student experience, and which surface they prefer. Several scientific studies have found that dark text on a light background can be read faster, retained better, and is better for comprehension. This research is why books and most online websites have a white background. Also, a white background with brightly colored text tends to be more attention grabbing and keep students’ interest. 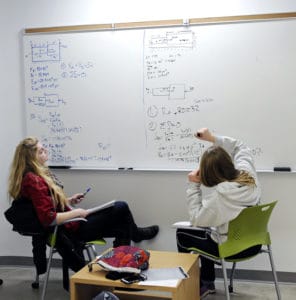 By providing writeable surfaces on all walls of a classroom and throughout academic facilities, opportunities are created to encourage visible and social learning for all students. According to a Jisc report “Designing spaces for effective learning” (2006, p. 28), “well-designed social spaces are likely to increase students’ motivation” to learn. While in universities students must be able to think independently, “the range of skill that can be developed” in a social setting “exceeds what can be attained alone” (Falchicov, 2007, p. 129). It would stand to reason that campuses are on the right track in their use of multiple boards (black or white) in various locations.

How does a campus ultimately decide what to do? Most campuses, and certainly most large public institutions, prefer whiteboards. While they aren’t offered much choice in the matter, faculty certainly still have opinions on the subject. On some campuses, faculty are given input on the decisions. Some institutions outfit classrooms with either blackboards or whiteboards, depending on the department, which offers the faculty members and registrar choice in selection of rooms for courses.

Both blackboards and whiteboards deserve respect on campus. Each one has their own unique qualities that are admired by the users and facilities staff who maintain them. In either case, the trend is that writing surfaces should be large and installed on multiple walls for maximum access to writable surfaces.

It’s not you, board. It’s the instrument

For my next post, I am going to purchase and experiment with the use of various writing tools. There are several options on the market now for consideration. For chalk lovers, there is a product called dustless chalk. The name is a bit deceiving because there is still dust, but the dust particles are heavier and fall to the floor. While there is still a mess to clean, at least the dust is said to not float into the air bringing harm to humans and devices.

Another product to consider is a liquid chalk marker. These markers do not have a chemical odor like dry-erase markers, and colors can be overlapped similar to standard chalk. You often see these markers used for restaurant and café menu boards.

Another product being used more frequently for whiteboards are wet-erase markers. Previously used for overhead transparency films, these are made with a semi-permanent paste instead of an alcohol based ink. Because of this, the mark does not easily smear or rub off, have a strong smell, and requires only a damp cloth to clean. While a wet-erase marker can only be used on whiteboards, liquid chalk markers can be used on both whiteboards and chalkboards. I’m excited to try these and report back on their pros and cons.